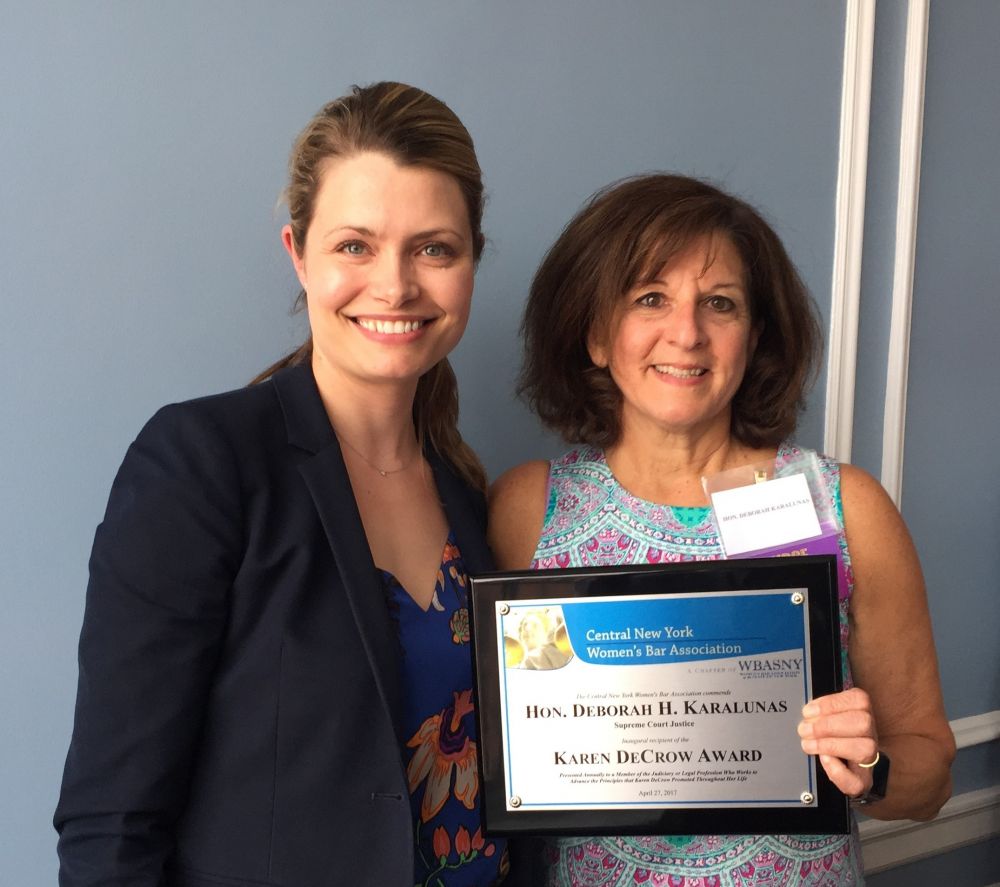 Karen DeCrow was a founding member of the CNYWBA, a founding member of the upstate chapter of the National Organization for Women and served as its fourth national president.  Karen believed civil rights were human rights that should be extended to all and she devoted her life to fighting for them through legal process, political activism, education and debate.  The award honors a member of the judiciary or legal profession who works to advance the principles that Karen promoted throughout her life and will be awarded annually.  Very fittingly, this first Karen DeCrow Award was presented to Justice Karalunas at the former Hotel Syracuse (now the Marriott Syracuse Downtown), where Karen was famously denied entry to the Rainbow Room, as unescorted women were prohibited at that time.

Justice Karalunas’s accomplishments are many. She clerked for Judge Howard Munson of the Federal District Court for the Northern District of New York out of law school and had a vigorous private practice for nearly twenty years and was made partner at Bond Schoeneck & King.  She was elected to the Supreme Court for the Fifth Judicial District in 2002 (only the third woman to serve in such capacity) and became Presiding Justice of the Supreme Court, Commercial Division, Onondaga County in 2007.  She was re-elected to a second fourteen-year term last November.  She served as president of the CNYWBA in 2002, is a frequent lecturer and published author.  She is recognized by the bench and bar alike for her keen legal mind and as a fair and effective judge.  She is extensively involved in community organizations, volunteer work and her church.  Justice Karalunas was part of Karen DeCrow’s “revolution, not evolution,” the “movement that really moved” and is a role model to everyone in the profession, men and women alike.

Upon receipt of the award, surrounded by her mother, husband, son and five-year-old granddaughter as well as friends and colleagues, Justice Karalunas spoke eloquently about Karen DeCrow, with whom she had both a personal and professional relationship.  She remarked that Karen used the fact that “most of our grandmothers couldn’t even vote” as a barometer for progress in gender equality and pointed out how much further we have progressed as she can now unequivocally tell her young granddaughter that she can pursue any career and be whatever she wants to be.  Justice Karalunas said she was fortunate to have the unwavering support of family and colleagues and, thanking her husband, reflected that she was living proof of Karen DeCrow’s belief that for women to achieve equality in the workplace, women and men had to share parenting responsibilities.  Recognizing that progress has been made, Justice Karalunas also pointed out that there is still much to do and expressed her significant concern with the burgeoning crisis of human trafficking.

The Central New York Women’s Bar Association is deeply honored to have presented the 2017 Karen DeCrow Award to such a deserving and respected member of our legal community, the Honorable Deborah H. Karalunas.